Australia was different to say the least. The first thing I had to get used to was being stared at.
Biracial couples are not a new thing in Australia. We were in Brisbane for the most part, which is a pretty modern area. It was unexplainable why everywhere we went I seemed to stick out like a sore thumb. People literally stared me directly in my face without any shade. Just blatant gawking. We joked that I should buy a T-shirt that said “take a picture it will last longer”, or take pictures of us together and sell them for five dollars apiece. The other crazy thing were the flying foxes. They are actually members of the bat family. One morning I had gotten up early due to the jet lag, and I opened the blinds to watch the sun come up. At that moment a small flock of flying foxes flew right past the window. I completely freaked out. They are huge. They look like pterodactyls. It was as if I had gone back in time. I joked with her that I expected Fred Flintstone to come out of the driveway next-door.
We went into the rainforest one day. That was a rather unique experience. The canopy was so thick that it was dark during broad daylight in some areas. There were huge fucking spiders in there. This was an experience that was to be short-lived.
I made a total of three trips to Australia over the next few months.
I finalized my divorce and moved into a townhouse in Princeton. I had absolutely no furniture. It was truly starting all over again but it felt amazing.
I flew Niki out to spend that Christmas with me. We went to New York see the Christmas tree. It was as if I was seeing New York through a fresh pair of eyes. Everything was new.
Needless to say, our relationship deepened. We were trying to figure out how to make everything work. Being separated by half the planet presented a problem. Ultimately we decided that I would buy a home for us and she would move here. The problem was the children. The children’s father was being very fucked up over the whole situation. In order for the children to come here, he would have to give his consent. He was making it difficult. He was protesting the fact that his children would be around another man, yet he married another woman and they had a child on the way. So I’m like WTF?
On my next trip to Australia I decided to go to the Gold Coast. I rented a suite at the Q resort right on the beach. It had a fabulous view. While I was there I decided to get a tattoo. This is something that I had wanted to do for a long time and she talked me into it. I looked at it as a sign of my liberation and a marker for a new beginning. She decided to get a tattoo as well. I got one on my shoulder and she got a blue dragon tattooed on her lower back.
While I was at the resort her ex was constantly texting her. I thought something happened with the children, but he was asking all kinds of questions about me. I thought this was odd because he would have no reason to be so concerned about what I was doing if he had a new life. I chalked it up to jealousy and told her to tell him to fuck off. My instincts told me that something was wrong. Aside from this incident, she was not as enthusiastic about the move as she had been in the beginning. When I confronted her about it, she said it was about being away from her children, which was understandable. We even discussed me coming down there. I was willing to do whatever was necessary to make things work. We finally agreed that she would come here so I bought a home for us. I calculated how far 10 minutes drive from my office would be and I drew a circle on a map. I would find a house within that circle. Ultimately I found a house that I am living in now. It’s an old house that an elderly couple lived in. The husband had died and the wife was here with her older daughter. She was moving into a senior community because she couldn’t manage the place anymore. It was a perfect location because I was directly across the street from a school and I wasn’t too far from the college where Niki could go to get her degree. Plus I have an acre out back for the kids to be able to play. Bam done!
She came here not long after I bought the house to give it the once over. It was during that visit that things took a turn for the worse… 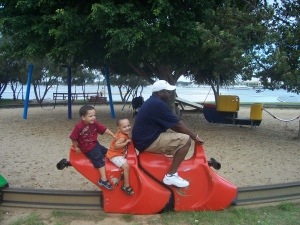